An independent research firm designed and managed an in-home test of the two products during June and July 2010. Participants, which included randomly chosen mothers with children in diapers throughout the U.S., were provided with both products to test in their homes under real life conditions for seven days each. Results indicate a clear preference for the ARM & HAMMER Diaper Pail.

“At Munchkin, we always look for ways to make the lives of moms easier. ARM & HAMMER Baking Soda has been trusted for generations for odor control, so we incorporated it into our revolutionary diaper disposal system to help today’s moms maintain a nursery free of odors,  said Doug Gillespie, Munchkin Vice President of Marketing. “We are proud that the innovation we have delivered to this category has once again proven to deliver such meaningful results for parents.

The ARM & HAMMER Diaper Pail neutralizes odors in the nursery through a patented odor control system with the power of ARM & HAMMER® Baking Soda at its core. For more information, visit www.diaperpail.com.

A privately held company headquartered in North Hills, Calif., Munchkin, Inc. creates baby products that excite, delight and make life easier for today’s parents. Founded in 1991, Munchkin, Inc. has placed great emphasis on innovation, redefining what baby products can achieve. As a result, Munchkin has reinvigorated the category with improvements such as a 2-in-1 bottle brush design and White Hot Technology® that lets moms know if the bath water or the car interior is too hot.

Another recent breakthrough was the ARM & HAMMER™ Diaper Pail, which neutralizes odors in the nursery through a patented odor control system. In January of 2010, Munchkin purchased Lindam, the U.K.’s top baby safety brand and a leading international developer of nursery products.

The company has won more than 30 industry awards, including the coveted Target® Corporation Partner Award of Excellence. Endorsed and recommended by lactation consultants, medical professionals, toy specialists and parents, Munchkin products can be found at more than 25,000 retail outlets internationally. For more information, visit www.munchkin.com.

“Diaper Genie is a registered trademark of Playtex Products, LLC, which is not affiliated with Munchkin, Inc. 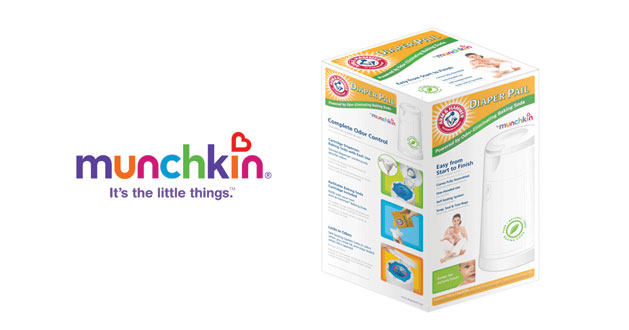 The UXB is a Webby Award Honoree for APL

APL Website and Packaging Win Big at the Davey’s!

The UXB® Is A 2009 Webby® Honoree for Munchkin® Website

The UXB® Continues Its Support of AVIVA

The UXB® is Featured in the Current Issue of BtoB

The UXB® and Cleatskins™ Take Their New Product Live